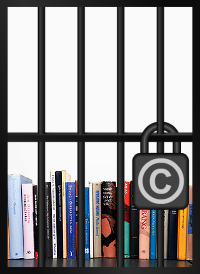 At QCO we make a point of calling things by their right names, and of encouraging others to do so.  For example, we always talk about “copyright restrictions“, instead of using the pro-monopoly propaganda word “copyright protection”.  Try it yourself: if you consistently substitute restrict for protect, and restriction for protection, when talking about copyright, it will always work grammatically and it will be more accurate.

The information monopoly industries would much prefer us to talk about “protection”, of course, by which they mean protection of their business model.  But most of us don’t say “pre-owned car” just because used car dealers would rather we said that instead of “used car”, and we can use the same principle of calling things what they are when it comes to copyright.

However, most media outlets (not to mention even other copyright reformers and abolitionists, sadly) still usually take the path of least resistance and continue using the term “protection”.  This may be partly because it lends an air of legalistic authority: lawyers almost always call it “protection”, not just for copyrights but also in the unfortunately consonant phrase “patent protection” and in the conceptually incoherent “intellectual property protection”.

That’s why I nearly jumped out of my airplane seat when I opened the New York Times this Friday, April 25th, and saw Farhad Manjoo‘s article “The Cloud Roots for Aereo, but People Need Better“.  It was the first time I’d seen anyone in a major mainstream media publication use the term “copyright restrictions” where most journalists would have said “copyright protections”.  Here’s the exact excerpt, starting from the beginning of the article:

“The best way to think about Aereo, the company at the center of this week’s Supreme Court battle over the future of computing, is as as an example of legal performance art.  Aero is based entirely on a legalistic leap of faith: If it’s legal to set up an antenna and record a TV show at your own house, which it is, shouldn’t it also be legal to rent an antenna and server space at a big data center, and then stream the show over the Internet to your computer, tablet or set-top box?

It’s a clever argument, one that highlights the extreme lengths that tech companies go to to avoid copyright restrictions. …”

Not only that, he never refers to restrictions as “protection” anywhere in the article.  Later he even repeats “restrict”, again accurately, and with a directness that has been too often missing from many others’ writings on this topic:

“Aereo is based on a loophole. To offer TV shows over the Internet, most streaming services like Netflix or Hulu pay licensing fees to studios. But licensing is expensive and restrictive; …”

Why, it’s almost as if he’s determined to report what’s actually going on!

I’ve been a fan of Farhad Manjoo for a while, so it’s gratifying to see him taking such care with language here.  But just to be clear, there’s no behind-the-scenes nudging going on, at least not by me: I’ve never met nor communicated with Manjoo.  Also, we have no reason to count him (or for that matter not count him) among those for radical reform or abolition of the current copyright system.  I don’t know anything about his political beliefs in this area, and his insistence on using accurate language doesn’t say anything about those beliefs.  It just tells us he’s trying to be a good writer, one who uses the most appropriate word despite environmental pressure to do otherwise.  Let’s hope he influences some of his colleagues to be equally accurate.