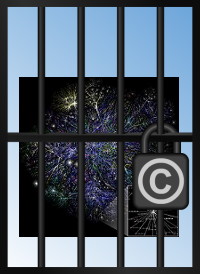 As reader libreuniverse pointed out in forwarding this, this is big, big news: large Internet service providers, on whom millions of people depend for their Internet service, are going to start acting as copyright police:

The short version: each ISP will maintain a database of “repeat offenders”, with gradually escalating punishments, starting with warning letters, then moving to slowing down the subscriber’s connection, and finally to cutting them off altogether.

This is going to hurt artists.  It’s going to drive unauthorized copying even further underground, onto the so-called “dark networks” where people use encryption and other forms of indirection to hide from the network provider (and therefore from everyone else except the intended recipient) what’s being copied.  Use of such techniques is already widespread, and now it will become common and normal.  This means artists don’t get credit for their popularity: it becomes more and more difficult for an artist to tell who likes them and where and why, because all of the sharing and the commenting and recommendation that goes along with it gets driven underground.  The ISPs are essentially forcing fans to hide their love of their favorite artists.

This is unfairly one-sided — the ISP holds all the cards.  There is no penalty for the ISPs when they make a mistake, so the tilt is all towards heavy-handed enforcement that will prevent all sorts of legal sharing and will inevitably punish innocent users.  I hesitate even to use the word “innocent”, since there’s nothing wrong with people sharing culture anyway, but even given  the distributor-driven bias of current law, this arrangement is unjust and will force many people to waste time fighting mistakenly-applied penalties.

This is nothing new.  The privatization of censorship has been the pattern with copyright since the very beginning, when the Stationers Company was first given a monopoly over printing in England and authorized to burn unapproved books and destroy unapproved presses.  The ISPs are now reconstituting that private sector information police force, first invented by England to combat the spread of seditious pamphlets… and later rejected by the English Parliament as being too great a restriction on freedom of speech.  Will it take us as long (thirteen decades) to come to the same conclusion?

This is what happens when media companies are also Internet service providers.  Anti-trust law typically focuses on confluences of power within the same industry, but this is a case of two mutually symbiotic industries — the management of state-granted monopolies in the form of copyright ownership, and the provision of Internet service to individual customers — that are increasingly run by the very same companies.  No one would advocate that recreational beverage companies also be put in charge of municipal water management, would they?  But that’s effectively what we get when media companies are also in charge of the pipes through which the information flows.  If ever two functions should be wholly separate, it’s these two.

On the bright side, the more people get those warnings from their ISPs, the more allies we’ll have in the fight for the freedom to share culture and to communicate without restriction.  It would be hard to imagine a more effective constituency-building measure — and even better, the ISPs are paying for it.  I’m thinking of requesting a summary of their implementation costs, so we can send them a letter of thanks and a confirmation of that amount as a donation.

2 Comments on "Stationers Company Redux: The Privatization of the Information Police Force"