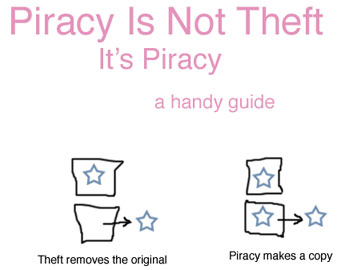 Thanks to Jessica Ferris for sending in this great image by Patri Friedman. How much more simply can one say it? Copying leaves the original untouched, therefore copying is not theft.

It’s interesting to read some of the commentary on Friedman’s post. For example: “This seems like semantic hair-splitting. If I go to some sort of practitioner of whatever and walk out without paying, I haven’t stolen anything tangible, just their time. Is it meaningfully different than if I’d reached into their wallet and removed $60 or whatever? I doubt they’d be any less cheesed off if I told them “actually what just happened wasn’t technically theft, it was something else.” [1]

It is not semantic hair-splitting. It is a simple, genuine, important difference. Your example indicates that you don’t understand it, which I find weird:

“If I go to some sort of practitioner of whatever and walk out without paying, I haven’t stolen anything tangible, just their time.”

The question is not tangibility. The question is whether, after I do ____, someone else then has less of something than they did before. If I “go to someone for their services, and don’t pay them”, they have less time than before. If I ask Google what I was going to ask the professional and so don’t need their services, they haven’t lost anything.

There is a comment relating copyright with trademark law (that’s something that we see all the time; can we come up with an equally powerful graphic to show how they’re unrelated?). And there’s the inevitable comment reiterating the received theory argument, which says that without monopolies people won’t be motivated to innovate. We really need to start countering that one with the point that a monopoly in a given field tends to suppress innovation in that field. And anyway, where’s the evidence? If these monopolies are so necessary for innovation, then why is there no shortage of innovation where monopolies are not given (the fashion industry, say, or cooking).

But all these words don’t match the eloquence of Patri Friedman’s graphic. It’s simple, memorable, and irrefutable.

And no, by the way, I didn’t ask Patri Friedman before posting a copy of the image here. His whole point is that we shouldn’t have to. We credit him and link back, of course, because credit is like time or money, in that when you take it from someone, that person actually loses something. Copying the image while still giving him full credit is exactly in the spirit of his post.

21 Comments on "“Piracy Is Not Theft” graphic by Patri Friedman"