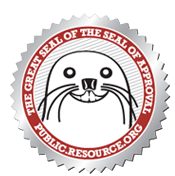 Thanks to James Jacobs for sending in a link to the article “He’s giving you access, one document at a time” by Nathan Halverson at pressdemocrat.com. It’s about how Carl Malamud and public.resource.org are defying the state of California by — get this — putting California’s laws online for public access.

You wouldn’t think that would be a particularly controversial thing to do. In fact, you might even expect California to have done so already, and in standard, parseable electronic formats too (as per the Open Government Data Principles). But instead, California enforces copyright over the texts of its laws. Quoting from the article:

California asserts copyright protections for its laws, contending it ensures the public gets accurate, timely information while generating revenue for the state.

It’s a great example of how copyright restrictions inevitably spread to new areas, without regard to the public purpose. The logic goes something like this: the law is a text; a text has value according to its usefulness; if a text has value, someone can make money by restricting who shares it and then charging money for a lease on that monopoly; the state always needs revenue; ergo, the state should restrict the spread of its own laws, in order to raise funds! The reasoning is bizarre, almost breath-taking in its audacity. And it leads civil servants to claim, with straight faces, that the state has an interest in denying people access to the text of the law.

What’s most interesting is how clearly this case reveals the old relationship between printers’ monopolies and copyright law. California justifies their copyright restriction in exactly the same way the English Parliament justified the first copyright law: that the public good is best served by profitable distribution, and that means supporting printers by giving them a monopoly.

Of course, that argument made a lot more sense in 1709, when there wasn’t an Internet around to allow zero-cost distribution of public goods :-).

2 Comments on "Can laws be copyrighted? Carl Malamud and public.resource.org say no…"