The Academy Awards happened Sunday night, as you, and perhaps James Franco, may be aware. Over breakfast Monday morning, I reviewed the hilarious snark about the Oscars that had filled my tweetstream overnight. Among the catty epigrams, I found the intriguing observation that in awarding the Oscar for Best Original Score to Atticus Ross and Nine Inch Nails frontman Trent Reznor for The Social Network, Hollywood had given its approval to a musician who has capitalized on remix culture in recognition of work that lifted straight from a classical composer.

On February 24, 1876, Henrik Ibsen’s play Peer Gynt, loosely based on a Norwegian fairy tale, made its debut with incidental music by Ibsen’s countryman Edvard Grieg. “In the Hall of the Mountain King” has since joined the canon of Classical Music’s Greatest Hits. It has been used in movies, TV shows, commercials, and video games, and has been arranged and covered by numerous musical artists outside of the classical genre. In last year’s The Social Network, Reznor’s version of “Mountain King” made the “Winklevii”’s Oxford boat race one of the film’s most memorable scenes.

Did Grieg get name-checked by the Academy alongside Reznor and Ross on Sunday night? No. Did the duo have to license “Mountain King” from Grieg’s family (or, more likely, from TONO, Norway’s music copyright collection society) before including it in their score? No. Grieg’s Peer Gynt is in the public domain. “Mountain King” has long since joined the European fairy tales that motivated Ibsen in the shared cultural treasure trove to which artists in America and elsewhere continually turn for inspiration and raw material, whether intentionally or unconsciously.

Reznor clearly understands the value of a vibrant public domain. As Nine Inch Nails, he achieved fame through his artistry with samplers and synthesizers before becoming one of the first big-name acts to recognize fans as creators, not just consumers. He has sampled everything from Star Wars to the “Amen” break and credits punk legend Iggy Pop for informing the driving beat to “Closer,” NIN’s biggest hit. For 2007’s Year Zero, NIN released several tracks as audio files for fans to remix, subsequently creating an interactive website devoted to fan remixes (including mixes of The Social Network tracks). NIN released its two most recent albums under a free-for-non-commercial-use Creative Commons license, allowing downloads free of charge, and has distributed high-definition concert footage through torrent files. 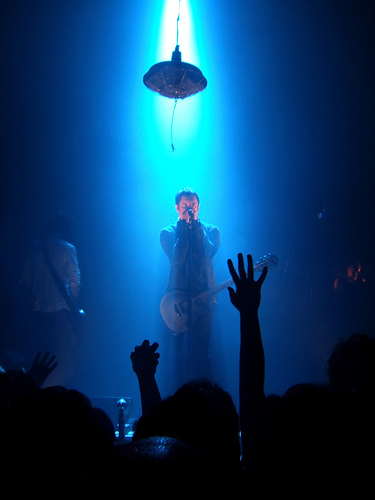 The result: thousands of remixes and millions of downloads. Relinquishing tight-fisted control of his work, distribution, and revenue stream has not caused the demise of Reznor’s livelihood. Trent Reznor is still a rock star.

And now he’s an Oscar winner too, thanks to the same interest group responsible for the remarkably effective industry capture of national and international lawmakers with respect to copyright issues. Lobbying by the Motion Picture Association of America (MPAA), among others, resulted in the passage of the Copyright Term Extension Act of 1998, which, besides doing what its name suggests, also pulled back under copyright works that had already fallen into the public domain. On the international stage, the proposed Anti-Counterfeiting Trade Agreement calls for criminal penalties for copyright infringers and could subject Internet Service Providers to liability for their subscribers’ actions. (The MPAA was one of the few outside entities to be made privy to the draft text of ACTA, whose negotiations have been conducted in secret.) If adopted, ACTA’s chilling effects would make it much more difficult for artists such as NIN (and its fans) to share and build upon each other’s work, even when their activities are entirely legal.

With its sinister melody and increasingly frenetic pace, “In the Hall of the Mountain King” would make the perfect theme song for Hollywood’s escalating efforts to impose its supramaximalist view of copyright on the entire globe. Yet on Sunday, Hollywood gave its highest award to the poster child for remix culture. In an age when Disney claims to own the rights to ancient fairy tales, the Best “Original” Score includes a version of a public-domain piece written for a play inspired by folklore.

The immense irony of the award evidently got lost during the commercial break, and the Academy called in thirtysomethings’ nostalgia for their gothy teenage years as a seat-filler. And so the battle for enclosure of the cultural commons raged on unacknowledged in the background Sunday night. Meanwhile, Reznor accepted his Academy Award, his fans uploaded more remixes of his winning score, and Edvard Grieg’s descendants slept soundly in Norway. They weren’t waiting for Reznor outside the Kodak Theatre with their hands out for royalties, 135 years almost to the day after Peer Gynt’s debut. Yet locking up our cultural treasure chest seems to be exactly where we’re headed, if the people who fill out the Oscar ballots have their way. Now that’s a nightmare worthy of the Trent Reznor treatment.

UPDATE 3/7/11: The Supreme Court has granted cert in Golan v. Holder. This will be a case to watch!

(The Academy of Motion Picture Arts and Sciences would like us to remind you that, as the copyright owner of the Academy’s “Oscar” statuette, and owner of its trademarks and service marks, including “OSCAR®,” “OSCARS®,” “ACADEMY AWARD®,” “ACADEMY AWARDS®,” “OSCAR NIGHT®,” “A.M.P.A.S.®” and the federally registered “Oscar” design mark, it believes that it is required to protect its properties against unauthorized uses and infringements. While we think that the use of the image in this article falls within the purview of fair use, the statuette is ©Academy of Motion Picture Arts and Sciences®.  We thank our parents, our lovely families and friends, our wonderful colleagues, everyone on the crew, and especially the Academy for giving us this opportunity to use the Oscar Statuette image.)

1 Comment on "And the Winner for Most Ironic Oscar is…"