One of our upcoming projects is the Minute Memes video series (we’re hunting down funding for that and other things right now — leads welcome). Nina Paley, award-winning animator of Sita Sings the Blues, wanted her next work after Sita to be about copyright restrictions and censorship, and hit on the idea of “Minute Memes”: short, viral videos that use visual storytelling to spread truly revolutionary ideas. You know, radical stuff, like the notion that people should be able to share music without asking permission, or that making a derivative work is an act of homage not destruction. The sorts of ideas you’re not likely to hear from the MPAA or the RIAA, who, of course, are busy making their own videos to convince you that culture should be owned.

The first Minute Meme will be a video called “Copying Isn’t Theft”. It’s not ready yet, but Nina’s written a song to go with it. Or at least the lyrics and the tune — the rest of the arrangement comes from you. Musicians out there, what can you do with this?

Go wild. Rearrange it, re-dub the vocals, do whatever you need to do. When you think you’ve got something good, post it somewhere and leave a comment here (or contact us). If it’s close enough to what Nina was aiming for, we may be able to use it in the Minute Memes.

Copying isn’t theft
Stealing a thing leaves one less left
Copying it makes one thing more
That’s what copying’s for.

Copying isn’t theft
If I copy yours, you have it too
One for me and one for you
That’s what copies can do.

If I steal your bicycle,
You have to take the bus
But if I just copy it,
There’s one for each of us!

Making more of a thing
That is what we call copying
Sharing ideas with everyone
That’s why copying…
…Is fun!

She sang that as part of a longer interview conducted by Reel 13 (WNET New York), at the Software Freedom Law Center:

Thanks to the folks at Reel 13 (WNET New York) for interviewing Nina, and thanks to the Software Freedom Law Center for the use of their space.

Also, a terrific article, “Sita sings the copyright blues”, came out on the Canadian Broadcasting Corporation site today. Word is getting out… 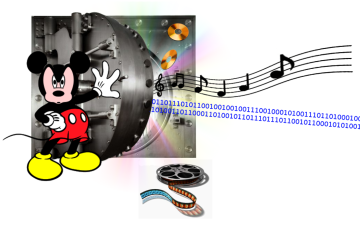 15 Comments on "Calling All Musicians: Can You Arrange This Song?"