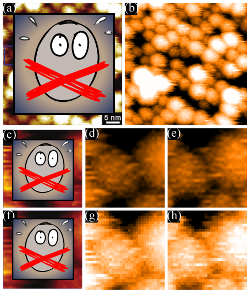 A band of researchers has been tirelessly trying to demonstrate that a body of scientific work which rests on a paper from over 10 years ago is completely wrong. The only problem is, their argument isn’t being allowed to stand or fall on its merits — instead, copyright restrictions are interfering with their ability to make their case at all.

The “stripy nanoparticle” saga begins with a 2004 publication in the journal Nature Materials (DOI: 10.1038/nmat1116) from Francesco Stellacci’s lab, describing a method for synthesizing small gold nanoparticles — particles on the order of 10 nanometers in size — that are coated with alternating “striped” domains of two different chain-like molecules attached to their surface.

While it wasn’t surprising that those specific types of chain-like molecules attach to the surface of the small gold nanoparticles, it was surprising (to some scientists) that the chains would order themselves into such organized striped patterns. So surprising that Raphael Levy, a researcher from the University of Liverpool, took a critical look at the data behind the conclusions in the 2004 paper. He believes that the evidence for the existence of these striped nanoparticles is the result of spurious observations that likely originate from poor experimental technique and cherry-picking of statistical data.

After extensive delays in the peer reviewed publication process, Levy’s first response was eventually published in the journal Small (DOI: 10.1002/smll.201001465), three years after the response had been first submitted to Nature Materials for publication. It was around then that Levy began blogging to focus attention on the topic as well as on more generalized shortcomings of scientific publishing process. The blog attracted discussion from a number of other researchers and spurred writeups in the scientific press.

Since that time, Julian Stirling has authored a paper along with Levy and a group of other researchers that has provided a comprehensive critical analysis of  Stellacci’s 2004 paper and related work that followed.  Stirling et al.’s “Critical assessment of the evidence for striped nanoparticles” was deposited on the open access preprint server arXiv, and became the most discussed paper on the popular post-publication peer review site PubPeer. The paper was also accepted for publication in the open access journal PLOS ONE.

What does this have to do with copyright?

In order to make their case to the reader, Stirling et al. need to reuse figures from Stellacci’s earlier work, so that the comparisons and alleged errors can be clearly communicated. The problem is that publishing houses like the the Royal Society of Chemistry (RSC), John Wiley & Sons, Nature Publishing Group and the American Chemical Society must grant permission to make use of these figures for PLOS to republish them, as PLOS publishes under the freedom-friendly Creative Commons Attribution (CC-BY) license, and its readers depend on what they receive from PLOS ONE being reuseable under terms no more restrictive than that.

At the time of writing, only the RSC has granted permission. Wiley has responded in the comments at Stirling’s blog, saying that while they’ll allow re-use with no fee under standard copyright, they won’t simply relicense the images to be compatible with PLOS ONE’s non-restrictive distribution policy.  (What Wiley actually says is that they are “unable to change [the images’] copyright status”, which is simply false.)  It isn’t yet clear how this will be resolved.  Offering the image at no fee for this one use is not a particularly helpful move on Wiley’s part: the restrictions would still be quite onerous, because Wiley’s one-off exception would not be passed along to PLOS ONE’s readers — instead, they too would have to ask Wiley for permission if they wanted to use the figures in a scientific critique… and so on, ad infinitum.  Creating a gatekeeper does not always create tolls, but it does force everyone to at least stop at the tollbooth before proceeding, and that’s exactly the problem here.  Wiley’s “rights department” (that is, their restrictions department) has inserted itself into scientific discussions where it has nothing to contribute and can only hamper the flow of communication.

Stirling et al.’s frustration is tangible — and they clearly understand that the culprit is censorship implemented via copyright:

“The traditional publishers who published the work we’re critiquing can’t censor our paper now, can they? It isn’t their journal, so they can’t refuse to review/publish it … But they still have one trick up their sleeve. Copyright. They own the copyright on the papers we criticise, and many of the new open-access journals they hate so much use Creative Commons licensing. They have the right to refuse permission to reuse parts of their figures. But just how can anyone write a self-contained critical article about data misrepresented in figures without being able to include at least some of the original results for critique and analysis?”

“It beggars belief that the scientific publishing system is so screwed up that this type of farce can happen.”

These events clearly illustrate how copyright restrictions are not just a problem for cultural production. Copyright interferes just as much with the clear and referential communication needed for the healthy functioning of the scientific process. The point is not that Levy and his colleagues are right or wrong. The point is that whether they are right or wrong should be a matter of science, not censorship.