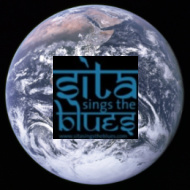 Film-maker Nina Paley is close to having her award-winning feature film Sita Sings The Blues out of copyright jail and onto the Internet for free, decentralized distribution.

Our goal is to have the entire film available online by Saturday, March 7th.

We’ll need some “seed” sites to host it: Internet servers with the capacity to offer around 10 GB of data for public download (so we can make the film available at various resolutions). If you or your institution has the bandwidth and storage for that, please contact us. We’ll work out a way to get the data to you.

That night, Sita Sings The Blues will be broadcast on New York’s public television station WNET — Channel 13 (see here for details). Public television has a special exemption written into U.S. copyright law, such that they can show the film even when it’s still in copyright jail for everyone else. However, Nina Paley has made progress on finalizing contracts with the music composition copyright holders, and we believe we’ll be able to release the entire film by then. Since the New York showing will expose the film to a large new audience, when those people go to recommend it to all their friends, we want their friends to have an easy way to get it.

Note that free distribution really means free: you will be able to watch the film on your computer, make DVDs and distribute them, and hold public screenings (the film will circulate online in high-resolution formats appropriate for screenings). Your activities can be commercial or non-commercial, that’s up to you.

Our thanks to all who have donated so far to enable this experiment in decentralized distribution! But we can still use help: the rights clearance process — or rather, the “restrictions clearance” process — is not cheap. So if you’ve been considering donating to support Nina’s effort, here’s that link again.

11 Comments on "Help Wanted: Can Your Servers Host a Feature Film?"