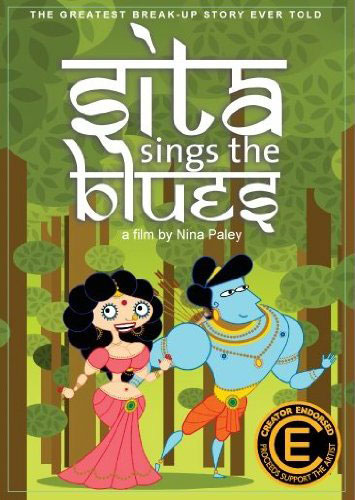 (NOTE: If you came here to help support Nina Paley’s free distribution of Sita Sings the Blues with a donation toward her expenses in releasing her film, please see the donations section below.)

The Sita Distribution Project is a public demonstration of how an artist can flourish — economically and artistically — by letting her works circulate freely and making it easy for audiences to support the artist financially.

It's not about self-distribution, it's about audience-distribution: put the work out there, let people share it, give them the freedom to organize activities (both commercial and non-commercial) around it, and the artist will benefit, because audiences want to support artists. Our goal is a comprehensible, repeatable model that can be used by independent artists everywhere.

The test subject is artist Nina Paley (now our Artist-in-Residence), who released her award-winning, feature-length animated film Sita Sings the Blues to the world under a totally free license in early 2009. That's free as in "freedom": anyone can make copies, anyone can sell copies, anyone can hold a screening (for profit or otherwise), anyone can make related merchandise, no one needs to ask permission for anything.

Subtitles provided by audience members from around the world.

You can also watch the entire film on Vimeo, Channel 13, and download it from The Pirate Bay and other peer to peer communities.

This distribution model puts the artist squarely on the audience's side: instead of telling people they shouldn't share, the artist encourages them to share. But the key is to do more than just put the work out there and hope for the best. You have to set up infrastructure that makes the artist the focal point for economic activity around the work — not the exclusive owner of all economic activity, just the focal point. Instead of imposing a monopoly on the work itself (which pits artist against audience), let the work flow freely and take advantage of the one natural monopoly that comes from being the artist: attribution, that is, credit for having made the work. Audiences appreciate proper attribution, and will enforce it, because they want to be on the artist's side. Nina explains this all step by step in her piece, “How To Free Your Work“.

The Results So Far

So far, Nina has made more money by this method than any traditional (i.e., exclusive) distributor was offering before the film's release. Since releasing it for free distribution in February of 2009, she's received approximately $28,000 in donations and another $25,000 in sales of DVDs and other film-related merchandise from the online store. (Note that the donations are dedicated to paying back music licensing fees she had to pay to be able to release the film at all; there's more on that here.)  The average donation is a bit over $10 US (but that's not counting the rare outliers, the occasional donations of $500 or $1000 — if you include those, the average donation is around $30).

Best of all, her income stream is fairly steady. This is the opposite of the traditional "burst and fade" distribution model that so many works endure, dragged out of circulation prematurely to avoid competing with new releases from the same publisher. Because Nina's film is audience-distributed, it's in circulation forever, whenever and wherever people want to see it. And all those audience members are potential customers and donors, as the financial results bear out.

Raw data: While we have to protect the privacy of donors and customers at the online store, we can release summary data and anonymized data. Please see the donations summary, store sales summary, and the store sales details. We're sharing this data in order to give other independent artists some concrete numbers about what a freedom-based distribution model can bring.

Nina Paley's preliminary report from five months after the free release of her film, including the talk she gave at DIY in Philadelphia.

Getting Out Of Copyright Jail

Because Sita Sings the Blues uses some music from the 1920s that's still under copyright, Nina Paley had to pay a lot of money — approximately US $50,000.00 plus another $20,000 in transaction costs  —  to get it out of copyright jail (she talks about it in this interview.)

QuestionCopyright.org is helping her — and you can help too. We want to see this distribution project succeed, as an example of how letting go of monopoly control can benefit everyone (including the artist), so we're using donations to this project to help pay back that loan, in a fiscal sponsorship arrangement with Nina Paley.

That means you can donate to help with the costs of getting "Sita Sings the Blues" out of copyright jail (see below), and your donation will be 100% tax-deductible in the U.S. to the extent permitted by law.

The response so far has been tremendous, and gratifying to Nina as well. But we've still got a long way to go. If you liked "Sita Sings the Blues", and liked the fact that you can make copies for all your friends, please consider donating.

As Nina Paley told us in her interview here last November, in order to release Sita, the monopoly holders for some of the musical compositions used in the film have to be paid off (yes, even though the songs were written in the 1920s). The approximate cost of this is US $50,000 (plus another $20,000 in transaction costs, such as lawyers and a rights clearance house). Nina took out a loan to pay this up front; the funds we raise go toward paying off that loan and toward other expenses related to distribution. QuestionCopyright.org takes no percentage for operating expenses; all funds raised go directly to this project.

Make a directed donation to the Sita Distribution Project here:

"Sita Sing The Blues" has a lot of momentum right now. It's been extremely successful at screenings (you can hold a screening too, if you want), and the famous film critic Roger Ebert wrote a rave review of Sita. The time is right to show what happens when a film of that quality is released freely, in such a way that anyone can do any kind of screening anywhere. We're working with Nina Paley to use this as a platform for advocating copyright reform and freedom of information — and the bigger the audience, the more minds we can reach. Please help! If you know of other works in copyright jail, please put them in this free transparent PNG jail cell (click on the image to get a larger version): 38 Comments on "The Sita Sings the Blues Distribution Project"