“Credit Is Due (The Attribution Song)” is one of the many memes in our Minute Memes series and was supported by a grant from The Andy Warhol Foundation for the Visual Arts.

LYRICS:
Always give credit where credit is due
if you didn’t write it, don’t say it’s by you
just copy the credit along with the work
or else you’ll come off as an arrogant jerk

Always give credit where credit belongs
we know that you didn’t write Beethoven’s songs
pretending you did makes you look like a fool
unless you’re Beethoven – in that case, it’s cool

Proper citation will make you a star
it shows that you know that we know who you are
Plagiarization will only harm you
so always give credit where credit is due!

Synopsis:
Mimi makes a copy of a Beethoven Symphony with a giant copy machine. Trouble starts when Eunice erases Beethoven’s name and writes in her own. This makes Eunice look like an ass. Searching the Internet (itself a giant copy machine) confirms that Eunice is a liar. Eunice realizes her mistake and corrects it, but by then everyone’s moved on – her plagiarism is barely a blip in the spread of correctly-attributed cultural works through copying. 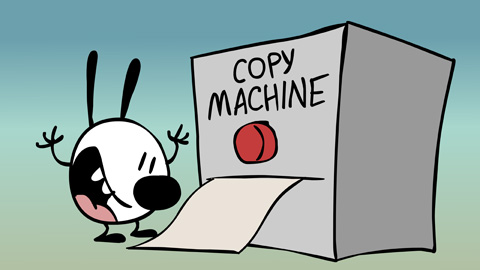 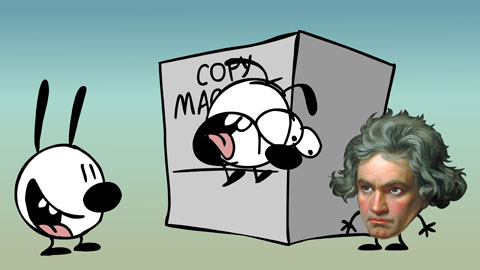 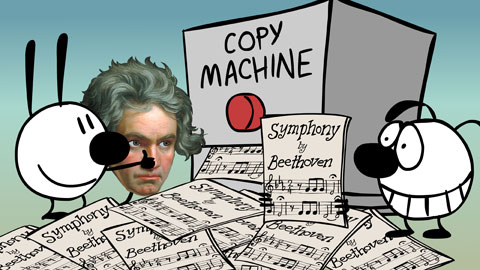 Whenever I speak about Free Culture at schools, I’m asked “what about plagiarism?” Copying and plagiarism are two quite different things. As Mimi demonstrates with the giant Copy Machine, copying a work means copying its attribution too:

just copy the credit along with the work

When people copy songs and movies, they don’t change the authors’ names. Plagiarism is something else: it’s lying. If Copyright has anything to do with plagiarism, it’s that it makes it easier to plagiarize (because works and their provenance aren’t public and are therefore easier to obscure and lie about) and increases incentive to do so (because copying with attribution is as illegal as copying without, and including attribution makes the infringement more conspicuous). American Copyright law does not protect attribution to begin with; it is concerned only with “ownership,” not authorship.  Many artists sign their attributions away with the “rights” they sell, which is why it can be difficult to know which artists contributed to corporate works.

I chose Beethoven to illustrate how copyright has nothing to do with preventing plagiarism. All Beethoven’s work is in the Public Domain. Legally, you can take Ludwig van Beethoven’s songs, Jane Austen‘s novels, or Eadweard Muybridge‘s photographs and put any name you want on them. Go ahead! You’re at no risk of legal action. Your reputation may suffer, however, and you definitely won’t be fooling anyone. If anyone has doubts, they can use that same copy machine – the Internet – to sort out who authored what. Lying is very difficult in a public, transparent system. A good analog to this is public encryption keys: their security comes from their publicity.

The song says “always give credit where credit is due,” but in many cases credit is NOT due. For example, how many credits should be at the end of this film? I devoted about two and a half seconds to these credits:

Movie and Song by Nina Paley
Vocals by Bliss Blood

But I could have credited far more. In fact, the credits could take longer than the movie. Here are some more credits:

What about sound effects? Were it not for duration constraints, this would be in the movie:

Every single sound effect in the cartoon was made by someone. Should I credit each one? Crash-wobble by (Name of Foley Artist Here). Cartoon zip-run by (Name of Other Foley Artist Here). And so on: dozens of sound effects were used in the cartoon, and each one had an author. What about the little noises Mimi & Eunice make? Not only could the recording engineer be credited, but the voice actor as well (as far as I know, these were both Greg Sextro).

I included a few seconds of Beethoven’s Fifth Symphony at the end, which I didn’t credit in the movie.  Should I have? Why or why not?

I could credit the characters:

I could be more detailed in crediting myself:

I didn’t even make a card for the Minute Memes logo. Should that be in there?

I used a Public Domain painting of Beethoven for the Beethoven character, which is by Joseph Karl Stieler.  Who photographed the painting? Who digitized the photograph? Is credit due here? The ass drawing also came from Wikimedia Commons, where it’s credited to Pearson Scott Foresman. But who actually drew it? I have no idea. I doubt that Pearson Scott Foresman could even legally claim the copyright on it to “donate” to Wikimedia in the first place, but there they are, getting credit for it instead of an artist. That’s because copyright is only concerned with “ownership,” not authorship.

Then there’s the software I used, good old pre-Adobe Macromedia Flash. Should I credit the software? What about the programmers who contributed to the software?
I also used a Macintosh computer (I know, I know, when Free Software and Open Hardware come close to doing what my old system does, I’ll be the first to embrace it) and a Wacom Cintiq pen monitor. How many people deserve credit for these in my movie? Mimi and Eunice themselves were “inspired” by many historical cartoons. Early Disney and Fleischer animations, the “rubber hose” style, Peanuts, this recent cartoon, and countless other sources I don’t even know the names of – but would be compelled to find out, if credit were in fact due. Is it?

And so on. It is possible to attribute ad absurdum. So where is credit due? It’s complicated, the rules are changing, and standards are determined organically by communities, not laws. I had to edit the song for brevity, but I kind of wish I hadn’t excised this line:

Attribution is a way to help your neighbor. You share not only the work, but information about the work that helps them pursue their own research and maybe find more works to enjoy. How much one is expected to help their neighbor is determined by (often unspoken) community standards. People who don’t help their neighbors tend to be disliked. And those who go out of their way to deceive and defraud their neighbors – i.e. plagiarists – are hated and shunned. Plagiarism doesn’t affect works – works don’t have feelings, and what is done to one copy has no effect on other copies. Plagiarism affects communities, and it is consideration for such that determines where attribution is appropriate.

At least that’s the best I can come up with right now. Attribution is actually a very complicated concept; if you have more ideas about it, please share.

8 Comments on "Credit is Due (The Attribution Song)"