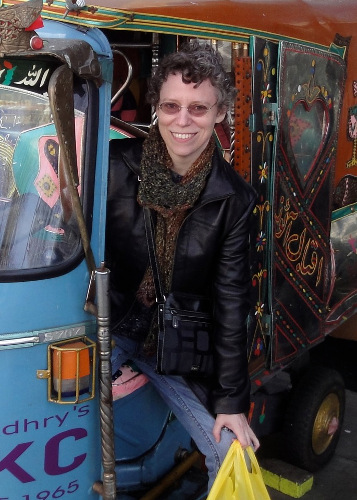 QCO Artist-in-Residence Nina Paley’s interview with at Baixa Cultura, conducted by email with journalist and photographer André Solnik. The English below is the original; Baixa Cultura translated Nina’s answers.

1. When your interest on free culture has begun?

For a long time I thought copyright terms were too long and the law could use reform, but I didn’t really understand Free Culture until October 2008, after months on the film festival circuit with my then-illegal feature Sita Sings the Blues. Free Culture was too audacious a concept for me to think about clearly until then. One morning I finally got it — freeing my work would be better for the work — and I spent the next half-year preparing for a Free, legal release of SSTB. That finally happened in March 2009, when I finally cleared all the necessary (and bullshit) licenses at a cost of about $70,000 to myself.

2. Tell me in short why artists should free their work. Is it a good choice for both renowned and new artists?

From my article How To Free Your Work:

3. Creative Commons has recently released the final draft of the version 4.0 of its licenses. What changes would you like to see? Do you think CC should keep on supporting the nonfree licenses?

Yes, CC should stop supporting the non-free licenses. What kind of “commons” is that?

4. Although they are probably the most known alternatives to more restrictive ones, they still remain unpopular compared to the “all rights reserved“. Why is that? Do you reckon people get confused by the many possibilities given by the CC licenses?

Most people who use CC licenses don’t understand what the different licenses mean; they just call all of them “Creative Commons” as if that means anything. CC’s modular system was a good idea, I see it as an experiment that was worth doing. But the results are in: it didn’t work. What we have now are a mess of incompatible licenses, most of which fail to contribute to any real “commons,” and an increase of confusion and misinformation.

You can’t really blame Creative Commons though — the problem is copyright law. Nothing can fix it at this point. Even CC-0, a valorous attempt to opt out of copyright, doesn’t work in practice, as my experience with the Film Board of Canada showed — even after placing SSTB under CC-0, their lawyers refused to accept it was really Public Domain, and made me sign a release anyway, just to allow one of their filmmakers to refer to it. I will be saddled forever with permissions paperwork even with CC-0. I’ll probably keep using CC-0, of course, but I have no expectation it will work as it’s supposed to.

5. The BY-NC-SA license, although nonfree, it’s pretty popular. Why do you think so? What are the main issues about licensing a work using it?

The way to avoid abusive exploitation is to use CC-BY-SA, a Share-Alike license without the -NC restriction. This allows your peers to use the work without fear, as long as they keep it Free-as-in-Freedom. Big corporate monopoly players, however, are unwilling to release anything Freely: if they want to use your work, they’ll have to negotiate a waiver of the -SA clause. For this they will pay money. It works like a regular licensing deal: for $X you waive the -SA restriction and allow them to re-use the work without contributing to the community. I have had many corporate licensors offer me such contracts, although I didn’t sign any because I was such a Free license booster.

The only reason BY-NC-SA is popular is because people really haven’t thought it through.

6. Money seems to be one of the main worries artists have when they hear someone saying “free your work“. Is this “fear“ justified? Have you recovered all the money spent in the making of Sita Sings the Blues?

No, this fear is not justified. But your question sure is biased: “Have you recovered all the money spent in the making of Sita Sings the Blues?” As if with copyright I would have! I have made more money with Freeing my work than I ever did with copyright restrictions. Period. Where do people get this idea that putting a © on something will magically generate money? It doesn’t. If it did, I would fully support copyright, and be rich. Copyright is a “right to exclude,” not a right to make money. You are free to make money without copyright, and you stand a better chance to as well.

7. You have recently announced that SSTB is now in the public domain. Although now you are finally free of burocracy envolving copyright stuff and this action could help your movie to have more visibility, on the other side it could favour restricted modifications of your work (e.g.: a book inspired by SSTB released under “all rights reserved“). How do you weigh these two sides?

Eh, honestly I just don’t care any more. Let’s just put it out there and see what happens. If something terrible happens because I shared freely, I’ll learn from that. But I think it’s stupid to worry about what other people do, and try to control it, especially with broken laws. Even Free Share-Alike licenses require copyright law to be enforced, and copyright law is hopelessly broken. I don’t want to validate or support it in any way.

Licenses are not going to fix our problems. What is fixing our problems is increasing numbers of people simply ignoring copyright altogether. Instead of trying to get people to pay more attention to the law, as CC does, I’d rather encourage them to ignore the law in favor of focusing on the art. Licenses are the wrong solution. Art is the solution. Make art not law.

I’m attending the 2013 Libre Graphics Meeting in Madrid this year, to discuss building a good Free vector animation tool I can actually use. More in this article, It’s 2013. Do You Know Where My Free Vector Animation Software Is?