Written by Lloyd Kaufman with Sara Antill. Lloyd Kaufman is founder of Troma Films. His most recent book, “Sell Your Own Damn Movie!” is now available in paperback. This article is cross-posted from IndieWIRE. –NP 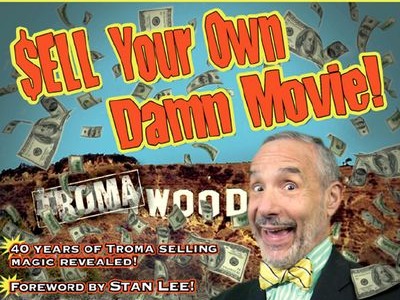 The cover of Lloyd Kaufman’s recent book, “Sell Your Own Damn Movie!”

I met a Troma fan in Florida a few years ago who told me how he used to get eight Netflix DVDs at a time, keep them for a day or two while he downloaded them to his computer and then return them for eight more. Once he had the digital files, he would make copies for his friends, asking about $2 for the cost of the blank DVD and the effort.

One night, while extremely high, he had figured out that, based on the number of movies he had copied and the penalty for each one, if caught, he would owe the government about $2.5 million in fines and face the rest of his life in prison.

Now, for someone who had already sold himself to the government in the form of federal student loans for film school, the prospect of an extra $2.5 million was pretty frightening. He gave up the pirate DVD business and started selling weed instead, as there were fewer risks involved. That was how we met. Last I heard, he was in jail for selling drugs, but he’ll be out sooner than if he had been caught selling $2 DVDs of “I Know Who Killed Me” to his friends.

Thomas Jefferson would have been appalled at this story. And not just because I think he would have liked trashy Lindsay Lohan movies. But because Thomas Jefferson believed that all art should belong to the public. For him, public domain was a large, thriving democracy, while copyright was a fat king thousands of miles away eating puddings and meat pies.

Unfortunately, we have reversed this with current law. Now copyright is king, while public domain has been relegated to obscurity. Thomas Jefferson, who was against copyright and said himself, “Inventions then cannot, in nature, be a subject of property,” finally agreed to compromise and include the issue of patents (and, by interpretation, copyright law) in the Constitution:

The Congress shall have Power … To promote the Progress of Science
and useful Arts, by securing for limited Times to Authors and Inventors
the exclusive Right to their respective Writings and Discoveries;

First of all, let’s understand that authors meant writers. No heavy metal singer or filmmaker was assumed to be covered under this law. And by “limited times,” Jefferson meant 14 years. That meant that if you invented something or wrote a book, you had 14 years to make back the money that you spent and make a profit. After that, the invention or work would become part of the public domain and other people would be able to improve on it.

That’s exactly what happened when Edison didn’t secure an international patent for his early film projector! Everyone in Europe, including those smarter and more passionate than Edison, had the opportunity to improve on his design and create the film industry that we know and love today!

In fact, while Edison was shooting his films in New Jersey, some bright folks had the idea to get out of New Jersey and New York and head to California to make their movies. It wasn’t because they loved the beach; it was because they wanted to be farther away from Edison so he would have a harder time enforcing his patents.

And there’s the irony—the entire Hollywood studio system was based on evading patent law, yet now they are the strictest enforcers! They are the ones suing sweaty prepubescent fanboys (and their parents) for downloading copies of “The Hurt Locker”!

Once patent and copyright law had been written into the Constitution, it was decided that everything created before the law would be considered public domain. That’s why the writings of Plato and Homer are free for anyone to use.

But considering that the ancient Greeks created democracy and civilization, you would think they would have created copyright law if they had wanted to. The fact that they didn’t makes me think they would have supported truly independent art. In fact, I may start calling myself a modern-day Socrates!* ( Like Socrates, I want to drink poison and die. But unlike Socrates, I am a chicken. Or at least a (Night of the) Chicken (Dead). (Shameless plug.)

So with Jefferson’s 14-year copyright, everything seemed fine. But then a man named Walt Disney created a little shit named Mickey Mouse, and everything changed.

HOW MICKEY MOUSE BEAT THE SHIT OUT OF THOMAS JEFFERSON

In 1928, Mickey Mouse appeared in the first sound-synchronized cartoon, Steamboat Willie , which was a parody (in Disnenglish, a copyright infringement) of a Buster Keaton film, “Steamboat Bill, Jr.” Mickey Mouse became an instant star and Walt Disney’s meal ticket. By 1956, when “Steamboat Willie” was all set to enter the public domain, Disney had become a powerhouse corporation, and it interceded on little Mickey’s behalf:

Disney Executive: You see, Senator, if “Steamboat Willie” were to belong to the public, they would pretty much own Mickey Mouse, too. And we can’t let that happen.

Senator: No, no. We must protect Mickey.

Disney Executive: What we need, Senator, is an extension of the copyright law. That way, we can keep Mickey safe.

The Disney executive puts away his hypnotist materials, leaves a pile of cash on the table, and leaves. The hypnotized senator wakes up with the overwhelming urge to protect Mickey Mouse. Days later, copyright law is extended.

This scene is repeated in 1984 and 2003. “Steamboat Willie” will remain the intellectual property of Disney until 2023, almost 100 years after it was created and many, many years after the last person who worked on it became snail food. And at some point before 2023, I’m guessing the copyright laws will be extended once again.

An interesting little twist to this whole story, which was sent to me by steamboat4eva@hotmail.com, is that someone at Disney discovered in the 1990s that “Steamboat Willie” may actually be in the public domain already. This was due to a mistake in the wording of the original copyright. A law student at Arizona State University investigated this claim and agreed. Then another law student at Georgetown wrote another paper confirming the claim. At this point, Disney threatened to sue the student and the claim hasn’t been uttered since.

I’m not advocating breaking the law. I can’t, because then if you do break the law, you can come back and say, “Kaufman told me to,” and that would be a gigantic goiter in the ass for me.

So I’m not telling you to become a pirate and break the law. What I am saying is what we need is to once again make public domain the Earth and demote copyright to a dwarf planet.

NOTE FROM LLOYD’S ASSISTANT: I don’t think you need to say this, since filmmakers didn’t exist at this point.

**LLOYD’S RESPONSE: I’m still operating under the theory that film was invented by the Chinese thousands of years ago.

******NOTE FROM FOOTNOTE GUY: Uh, should I take this out? Whatever, fuck it. I think Lloyd sucks balls, too.

3 Comments on "Why Piracy is Good and Copyright Sucks: An Excerpt From “Sell Your Own Damn Movie!”"