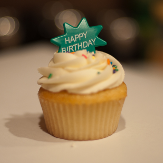 We’ve written about the Happy Birthday lawsuit here before.  Now it seems the case has reached a turning point — a “smoking gun” has been found, thanks to research in the files of the pro-monopoly side, Warner/Chappell: a copy of the “Happy Birthday” lyrics from 1922, that is, before the present-day copyright horizon.

The story (courtesy of Hollywood Reporter) is pretty fascinating in itself, but let’s go to town on the amazing claim Warner/Chappell seems to be making in response to this new discovery.  After all, what is QuestionCopyright.org for, if not going to town on the most absurd claims of the monopoly industry?

What Warner/Chapell seems to be saying is that even if it were found that the song lyrics existed in their current form in 1922 — that is, earlier than the current “earliest copyright horizon” — the fact that the 1922 copy of those lyrics might have been, at that time, a possible copyright infringement (which it obviously wasn’t, but we’ll leave that aside in order to grant the widest possible latitude to Warner/Chapell’s argument, for our own entertainment if nothing else) means that maybe the copyrights claimed later in 1935 are somehow still valid.  Or something?

But the mere existence of a version of a work before the horizon means that, even if that copy were in an copyright-infringing state at the time, whatever copyright it was infringing then must, clearly, have expired by now.  Because otherwise, the copyright horizon is not really a copyright horizon.  Unless you live in a world where time runs backwards and sideways, as Warner/Chapell perhaps does.

What this lawsuit really shows is what we’ve been arguing is the problem with broad information monopoly rights in general: once the state creates a monopoly, it creates a monopolist who owns it — or in this case imagines themselves to own it — and that monopolist will fight to the bitter end to keep it, against all reason and all evidence.  There is normally no representative of the public who has as clear and focused an interest in a given monopoly as its putative owner does; we just got lucky in this case that a filmmaker decided to take an interest in this one song.

Who will stand up for all the other songs?