It’s about to happen in the U.S.  Actually, it already does, given that copyright enforcement is inherently censorship-based (something many legislators are curiously unable to say aloud).  But it’s about to get much worse: the SOPA / E-PARASITE and PROTECT-IP bills currently pending in the U.S. Congress would, among other things, make it easy for private sector monopolists to cut sites off from the Internet without even proving that illegal copying has taken place.  Join us and many others who are censoring their logos today to oppose these laws that would place the United States on a collision course with Internet freedom.

(2020-12-14 Update: The petition site is no longer live, but you might want to learn about the more recent EARN-IT act, which is just as bad only in more ways.)

You’ll be in good company: Public Knowledge, the Electronic Frontier Foundation, the Free Software Foundation, Mozilla, Demand Progress, Fight For the Future, the Participatory Politics Foundation, Creative Commons, Wikimedia, and many more organizations (including us) have all stated their unequivocal opposition to these laws.  Even for-profit companies are putting their names on the line, including Google, Facebook, Twitter, eBay, Yahoo, and AOL.

Giving monopolists control over the Internet’s address book is a terrible idea.  Apparently some elected officials in the U.S. are under the misimpression that they were elected by the copyright industry, not by human constituents.  Let’s correct that before it’s too late.

Want to learn more?  Read our previous article about it, or click on the infographic below: 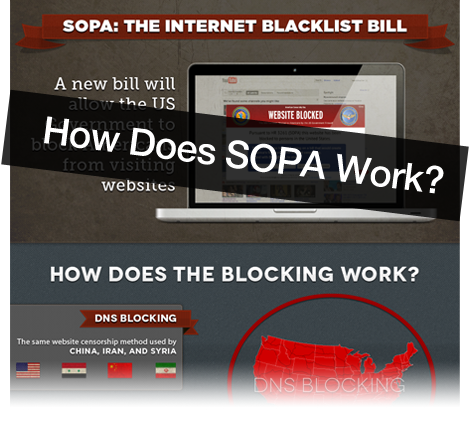 Any German speakers out there want to subtitle this short video by Nina Paley? In it, she tells, in English, how her film Sita Sings the Blues is currently being censored on YouTube Germany by GEMA, the German copyright collection agency (the ominous underworld connotations are unfortunately rather too appropriate in this case…).

EDIT July 15, 2011: Big Thank You to Cristobal for these subtitles!

We’d like to get this message wider circulation in Germany. We’d also appreciate it if GEMA and YouTube Germany would fix whatever misunderstanding caused them to censor the film in the first place! But since this surely isn’t the only film that this has happened to, it’s still important to spread the message that copyright restrictions inevitably result in censorship.

Note that we have already tried the official YouTube takedown counternotice procedure. It has resulted in exactly zero change: the film remains censored on YouTube Germany.

EDIT July 18, 2011: Hurray! Sita Sings The Blues is now, once again, viewable on German Youtube! Thanks to everyone who spread the word and got the story covered in outlets such as Der Spiegel. To learn more about the film, click on the Sita Distribution button at the top of this page.