On April 18th, 2007, I’ll be a panelist at a session with the provocative (and somewhat enigmatic) title of “Interoperability: computer industry giants versus music?”, at Les Rencontres québécoises de l’industrie de la musique, at the Bonsecours Market in Montréal, Quebec. The other panelists will be from the music distribution industry, plus at least one from the Electronic Frontier Foundation. I’m looking forward to a lively discussion! Full report here afterwards…

Well, this isn’t really a “full report”, but the panel discussion was terrific, and not at all the slugfest one might expect — genuine discussion took place. But the most interesting thing about the conference as a whole was that although it was mainly composed of people from the recording and radio industries, many were very receptive to the message that copyright is not always good, and many also showed signs of giving up on DRM as a strategy for controlling copying. It may be that the industry is starting to see the light, at least in Québec, Canada.

By now, the whole classical music world has heard of the Joyce Hatto scandal (Wikipedia’s article is excellent).

Joyce Hatto was a pianist who died in June, 2006. She didn’t play many concerts, but she recorded prolifically — or so everyone thought, until it was discovered, in early 2007, that most of her recordings were plagiarized from the records of other pianists. She never knew about it, apparently: the plagiarism was the work of her recording engineer and husband, William Barrington-Coupe.

The best part is how the deception was uncovered: when someone put her recordings onto a computer, automated comparison routines kept stubbornly identifying them as other pianists’ tracks!

It’s a great example of what we’ve been saying about artists putting their work online: sharing files widely prevents plagiarism, by making it much easier to detect. Forget Hatto herself for a moment — think instead of all those other pianists, whose recordings were passed off as her work: the reason the hoax was detected at all was because their track information was available online. And if the recordings themselves had been available online, the problem would only have been detected more quickly, probably years ago.

The unmasking had nothing to do with DRM, by the way. DRM is the set of software and hardware handicaps that prevents computers and music players from sharing files freely with each other. It’s true that some of the programs that detected the similarities between Hatto’s recordings and other pianists’ also have built-in DRM, but the DRM is utterly irrelevant to the comparison techniques that spotted the correlations. In fact, if DRM were as effective as the record companies wish it were, it would only have hindered the comparisons, since then the other pianists’ track information might not have been readily available for examination.

But we’ve still got a long way to go. The Wikipedia article on Hatto had the following sentence, as of early February 28th:

Meanwhile the British Phonographic Industry (BPI) has begun an investigation. If the allegations are true, it would be one of the most extraordinary cases of copyright infringement the record industry had ever seen, according to a BPI spokesman.

Notice how the hoax is identified as “copyright infringement“, not “plagiarism“. I checked the reference: the BPI spokesman apparently referred to “piracy”, so in the interests of accurate quoting, I’ve changed the Wikipedia article to say “piracy”. But that’s not really satisfactory: the word “piracy” is often used to refer to both unauthorized printing and plagiarism, as though the two are the same offense. The word thus provided a semantic pivot, around which some Wikipedian was able turn from one of the word’s meanings to the other, making it into a case of “copyright infringement”.

Who was this mysterious misquoter?

We’ll never know, because they did it anonymously, though clearly on purpose. For when the sentence was originally added, it quoted the BPI representative correctly. Later, someone came along and changed just one thing: “piracy” to “copyright infringement”. You can see the edit here. Probably they felt that “piracy” was too loaded a term, and that “copyright infringement” would be more accurate. Unfortunately, this is exactly the conflation — equating unauthorized copying with stealing credit — that the record industry promotes; the pity is that their effort has been so successful.

I’ve fixed the text to say “piracy” again. But the BPI spokesman should have talked about “plagiarism” in the first place, because that’s what we’re dealing with here, and the more we let digital files circulate freely, the less plagiarism there will be.

Purchase a sticker from our CafePress shop, http://www.cafepress.com/qco/ — and place it somewhere people will see it! (Hint: they fit on the back of a standard laptop computer. Or a car bumper.)

Want to join in? Here are some ways to help the effort:

Back in late 2006, Matthew Gertner (of AllPeers) and I did a mutual interview about copyright reform. It was a fascinating and wide-ranging conversation, and he’s posted it on PeerPressure, the AllPeers blog.

“…Rather than assuming that some copyright is necessary and trying to decide exactly how much is optimal, [Fogel] suggests that we imagine a world without copyright and take it from there.

He contends at the beginning of the podcast that, not only does he not know personally what the right level of copyright is, but that it isn’t possible to know this based on current evidence, a view that I find eminently reasonable. I also agree wholeheartedly with the way he concludes our discussion:

I think that there is some built-in exclusivity there but I also think… whatever change is going to happen is going to happen essentially through a market process. It’s not going to be that Congress suddenly wakes up and drastically reconsiders copyright law. Instead, some number of artists, just as some number of software developers did a couple of decades ago, will by choice release their stuff under these liberal copyrights, And they will create this little fertile safe space for sharing that will grow, and basically we’ll have two parallel streams: there’s the old stream and the free stream. And people will just start choosing stuff based on what they like, not based on ideological concerns about how it was produced. And we’ll just see what happens.

At the end of the day, we need to create an environment where individuals can test their own approaches to copyright and let the market decide what works best. I don’t necessarily see as strong a connection as Karl between liberal copyright terms and free content, however, and I hope that this makes our discussion more dynamic and thought-provoking.”

There are both download and streaming links available — listen to it here. 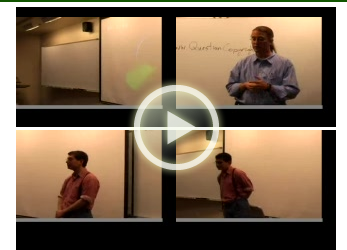 Click the image above to watch QuestionCopyright.Org Executive Director Karl Fogel delivering a talk at the Stanford University Library’s Technology Chalk Talk Series on October 19, 2006. The video is available to view and download on the Internet Archive.

The talk is about 90 minutes long, including the question-and-answer session after the presentation. The audience members’ backgrounds were in library science, computer science, publishing, and law, so the Q&A was particularly good in this talk.

On Thursday, October 19th, from 2:00-3:30 p.m., I’ll be giving a SULAIR Technology Chalk Talk on the history of copyright, hosted by the Standford Universty Library, in Room 102 of the Hewlett building (on the other side of the quad from Green library). Here’s a map to the building:

I’ll talk about the history of copyright, its original goals and its effects today, and will leave plenty of time for questions and discussion afterwards.

Many thanks to James Jacobs, User Services Technology Specialist at the Cubberley Education Library, for arranging this.

In order to document the public perception of copyright today, we went around Chicago with a video camera over two days in the summer of 2006, asking strangers what they think copyright is for, how it got started, how they feel about filesharing, and for any other thoughts they have on copyright. We didn’t tell the interviewees about this website or the nature of our project until after each interview was over.

The points that showed up consistently were:

You can view the video at the Internet Archive. It is also available at Google Video and YouTube.

The video is in the public domain; all participants signed a release form permitting their footage to be used. Many thanks to Ben Collins-Sussman and Brian Fitzpatrick for their help filming, and to Ben for huge amounts of help with editing.

“The Surprising History of Copyright” is coming to LinuxWorld at San Francisco’s Moscone Center, on Wednesday, 16 August 2006, 3:30pm at the O’Reilly Media exposition booth (#928). I’ll be giving a talk about the history of copyright, how the economics of replication and distribution have changed radically since the 1700’s, and how both creators and publishers can flourish using different strategies than the traditional copyright monopoly.

The slides for the talk “The (Surprising) History of Copyright and What It Means for Open Source” are available in PDF and OpenOffice Presentation formats. The slides are meant to be accompanied by the talk, and don’t really stand by themselves, but I’m providing them for those who didn’t have time to write down the URLs and the bibliography at the talk.

Copyright notice: These web pages are devoted to questioning the idea that copyright is necessary for the promotion of creative expression. Therefore, our content is released to the public and can be considered to be in the public domain: you may copy, share, excerpt, modify, and distribute modified versions of this and other pages from QuestionCopyright.org. We ask, but do not require, that you credit QuestionCopyright.org when appropriate and link back to the original article for online citation. When we publish articles by others, or quote from articles originally published elsewhere, that content is of course still under its original copyright. However, we only publish material that is available under a free license (except for short quotes covered by so-called "fair use" doctrine), so you'll still have all the aforementioned rights.